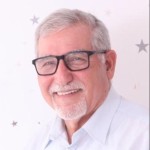 On the seventh of Pesach we celebrate the miracle of the crossing of the Red Sea. The most appropriate place to pray the ‘Shirat HaYam' (Song of the Sea) is where the miracle for our ancestors took place. Biblical scholars have raised different hypotheses where the Israelites crossed the Red Sea. Dr. Joshuah Meron researched all the theories and came to the conclusion that a miracle happened to our ancestors at Nuweiba beach in Sinai, about 60 km south of Eilat

The northern area of the Red Sea is the Gulf of Eilat. The slopes of the Sinai Desert Mountains towards the Gulf of Eilat are very steep. Anyone who has ever flown to Sharm el-Sheikh along the Sinai coastline saw from the plane windows that there is no suitable place for a camp of 2-3 million people. Only on the shores of Nuweiba there is a large and wide enough flat area

It is written in the Torah, "And encamp before Pi-hahiroth, between Migdol and the sea, before Baal-zephon" (Exodus 14: 1). Rashi interprets "They are two high and upright rocks, and the valley between them is called the Pi-hahiroth". Pharaoh said “The wilderness hath shut them in”. On both sides were steep mountains, in front of them the sea, and behind them Pharaoh and his soldiers approached

Another sign is that on the other side of the Gulf of Eilat, beyond the shores of Saudi Arabia, is Jabel al-Lawz, considered to be the Mount Sinai on which the Torah was given. It is therefore likely that the sea was crossed in this place

The average depth of the Gulf of Eilat is 900 meters (3000 feet) below sea level, and there are places where the depth exceeds 1,850 meters (6000 feet). In the depths of the Red Sea, only in front of Nuweiba there is a high bottom like a mountain, which peaks at a depth of only 33   meters (110 ft.) below sea level. It is 18 km (11 miles) long and about 600 meters (2000 ft) wide. It is underwater along the mainland of Nuweiba to the shores of Saudi Arabia. Like an underwater bridge

This is how it looks on a topographic map

And this is what it looks like in 3D simulation

The Torah says "And Moses stretched out his hand over the sea, and the LORD caused the sea to go back by a strong east wind all the night and made the sea dry land, and the waters were divided". Researchers state that the "strong east wind" is the result of a volcanic eruption in the Indian Ocean, which caused very high tsunami waves. When the water rises in one place, it falls down in other places. In this case, the water of the tsunami waves came from distant places like the coasts of East Africa and the Red Sea, where the water level dropped significantly. When the water level in the periphery of the tsunami drops by 34 meters or more, the bottom of the sea is exposed only in this "bridge". This explains the verse "And the children of Israel walked upon dry land in the midst of the sea

Waves are known to behave in a sinusoidal form of highs and lows. The recession ended after the Israelites reached the opposite bank, and the water began to return to its normal state. At this point, Egyptian army soldiers were captured there, and the water washed them and their chariots. As it is written "And the waters returned, and covered the chariots and the horsemen, even all the host of Pharaoh that went in after them into the sea

There are little-faith people who say, "According to this, the parting of the Red Sea was a natural phenomenon and not a divine miracle". Nonsense! They do not understand that it is unnatural that the Israelites got exactly in this point of all locations in the world, and entered the water just when a tsunami occurs in the distance, and that the Red Sea level dropped just below this underwater bridge, and that the water returned exactly just after the Israelites got to the other bank. The great miracle that God performed for our ancestors was in the precise timing and unnatural combination of all these "natural" phenomena

In addition, there are heretical archaeologists who claim that biblical stories never really happened, but are only a literary work written in the 10th century by an anonymous writer. For decades these "scholars" claimed that the Exodus and the crossing of the red sea are just legends mythologies. In our generation, archeological discovered evidence that contradicts their position, and prove our belief

it is written in the Torah, "And the Egyptians pursued, and went in after them into the midst of the sea, all Pharaoh's horses, his chariots, and his horsemen. And He took off their chariot wheels, and made them to drive heavily". About forty years ago, an American researcher, Ryan Mauro, discovered at the bottom of the sea the "their chariot wheels". He and his crew dived with a metal detector near Nuweiba, and 2.5 km from the shore they found metal wheels covered by coral, as well as wheel axles and carriage cages

Among them, they also discovered wheels made of gold, which coral do not stick to

Mauro brought one of the wheels to the director of antiquities in Egypt, who at first glance stated that they were from the 19th dynasty of the pharaohs.  He said that this was the only period in Egyptian history in which they created wheels with 8 spokes. In other generations, the ancient Egyptians used wheels with 6 spokes or 4 spokes. As is well known, King Pharaoh who let our people go was Ramesses the second of the 19th dynasty

After the miracle of the parting of the sea, the children of Israel sang the "SHIRAT HAYAM" song of the sea, with the verse "Horse and his rider hath He thrown into the sea". Mauro also found coral-covered bones at the bottom of the sea. He sent some of them for a histological examination at Stockholm University, without specifying where they were found. The researchers in the lab determined that these were human bones and horse bones, all at the age of 3,300 years. Suitable for the time of the Exodus from Egypt

About twenty years ago, researchers Ron Wyatt and Bill Fry came with more sophisticated metal detectors of the "Excalibur 1000" type, that can detect metals even at a depth of 2 meters inside the bottom of the sea. They found many more metal parts, including a carriage axis like those illustrated in tombs in ancient Egypt

and this was after the coral was removed from it

Archaeologists have also discovered two identical granite pillars on either side of the Gulf of Eilat. one is on Nuweiba Beach. Some of it was submerged in water, and the inscriptions on it were completely eroded. When the road from Eilat to Sharm was paved in 1971, it was taken out of the water, and placed on a concrete base that was poured at the side of the road. We should look for it when we travel to Nuweiba

An identical pillar was discovered in the Saudi bank, with the words "Pharaoh, Moses, water, Egypt, dead, Edom, Solomon, and G-d" engraved on it. In the 1980s, the Saudis removed this pillar and closed the area to tourists and research and diving expeditions

Dr. Yehoshua Meron writes that these pillars were erected by King Solomon. It is written in the Bible "Then Solomon went to Etzion Gaver and to Eylot by the seashore of Edom" (Book of Chronicles 8/17). Apparently, then King Solomon went south from Eylot another 65 km to place these pillars. It is possible that about these pillars it is said in the Bible "In that day shall there be an altar to the LORD in the midst of the land of Egypt, and a pillar at the border thereof to the LORD. And it shall be for a sign and for a witness unto the LORD of hosts in the land of Egypt; for they shall cry unto the LORD because of the oppressors, and He will send them a savior and a defender who will deliver them" (Isaiah 19/19)

These archaeological discoveries have enormous historical and religious value significance, much more above and beyond their geographical location. They prove that “Moses is true and his Torah is true.” Our argument with the infidels is over

In light of this, the most appropriate place to sing ‘Song of the Sea’ is at Nuweiba Beach, where the miracle took place. This year, the border between Israel and Egypt is closed due to the Covid epidemic, but on the Chol-HaMoed of Passover holiday in the coming years it is recommended to travel to Nuweiba with the Bible in our hand, to open the Book of Exodus chapter 14-15, and to see with our own eyes what is written in the Torah. The mountains and the sea in front of our eyes will interpret the Bible to us more than Rashi